How I Finally Came to Own a Horse

Horses have been a very important part of my life since I was a kid. I just loved everything that had to do with them: riding, grooming, feeding, even cleaning stables. My parents could not afford to buy me my own horse, but somehow I always found someone who would take me to the stable to help out, for which I sometimes got to ride. I spent my holidays at the local pony club and went for riding courses at some stables a few hours from home. On the weekends I got up at five to meet my friend at the racing stable so we could help to brush the race horses before their daily training. I don’t think we ever got to ride on one of these. We were just eleven years old, but the adults at the stable did not treat us like children. We woke up really early to come out there and they respected this. We got some instant coffee with milk and sugar, sweet bread rolls, and some invaluable experience of what it means to make a living with horses.

As I got older, I found out that there are many people who can afford to own a horse but don’t have the time to ride it. By then I wasn’t such a bad rider, so I found horse owners who were willing to share their horses with me. It was a good deal for both sides: the horse got some exercise and I learned to ride better and what it meant to be responsible of a horse.

In my final High School year I took care of three Frisians at the same time, riding two of them on a daily basis. I had a bad fall from the youngest and broke my spine, which, as you can imagine, put a stop to my horse riding for a while. However, as soon as I was on my feet again I found another horse to share (had enough of Frisians for a while). The last one, a huge white Holsteiner mare that I took lessons on a couple of times a week while I studied for a teacher’s degree, broke my big toe by just standing on it for a few minutes without any intention to move. I was so angry at her that I decided to not let her off the hook and have my lesson anyway.

After I graduated from the University of Leipzig, Germany, I moved to Poland and my life was horse-free for some years. I just didn’t find a riding club that appealed to me. Then, quite by accident, one of my friends mentioned that he went riding every Saturday morning at this stable out of Warsaw that offered cavalry riding. It sounded intriguing. The coming Saturday we met at 6.30 am to drive out there together. It was set at the edge of a beautiful forest, with large fields and a little romantic river close by. The stable building was very run-down, most boxes had two horses in them, and there was this intense ammoniac stench in the air. I was supposed to ride a horse called Nazir, got instruction of how to identify him and where to find his tack. Saddle and bridle looked very weather-beaten, but everyone was very friendly and the horses seemed calm. Nazir turned out to be a really friendly guy with a very nice canter and good behaviour. I decided to join my friend every Saturday morning. This cavalry-thing wasn’t really what I’d been looking for, so I started to take dressage lessons at this stable. Most riding instructors were not very qualified, to put it mildly, but I found one that I really liked and that I had lessons with three times a week. I heard that it was possible to ‘rent’ one of the school horses. For a monthly fee I could be the only rider and ride as often as I liked. I asked around the stable which horse people would rent if they could, and most of them said ‘Nazir’. I had not ridden him since I first came to the stable, about half a year ago. When I came into his box, he looked like this: 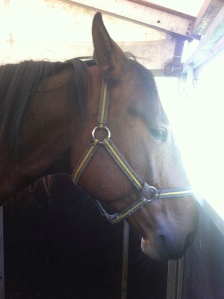 Now, you need to know that life wasn’t that easy for him at this stable. He lived in a tent box that was so small he could only stand in it diagonally. He had no water in his box. He could only drink when a riding student would take him out of his box and he could dive his nose in the water container that was standing there, or if the girls that worked at the stable didn’t forget to give him a drink out of a bucket. Of course no water during the night. The manure was cleaned out of his box about once a month, so he was basically standing in his own shit all day. He wasn’t allowed to go to the pasture (this was only for the privately owned horses), and he also didn’t see much of the sand paddock. Since he was a calm and friendly horse, many people requested him for a ride. Business is business, so the poor guy had to work six to eight hours a day with a badly fitting saddle and not very skilled riders on his back.

I had heard that Nazir really loved people when he had come to the riding school as a 2,5-year-old, but now I could only see disappointment in his eyes. I decided to make his life easier and rent him.

Nazir  wasn’t in a a very good physical condition. He was thin and didn’t have good muscles.

His hooves where just beyond words, totally eaten up by the bacteria. The thrush had destroyed his hooves so much that he couldn’t trot on hard ground. Cleaning his hooves was painful and people were not very careful with it. He had decided to just not give them. The different riding instructors showed me all kinds of tricks: stick the metal hoof prick hard into his frog so he would lift the leg out of pain, tie a rope around the lower leg and use his neck as a lever and such creative methods. I said thank you very much and started to work on the problem with a clicker and lots of carrots. I washed his hooves with soap and applied an effective trush remedy that I found online. Moreover, his hooves were cut very badly. The guy that came to cut the hooves wasn’t a blacksmith, and he did it for 10$ a horse, I guess that’s why they employed him. He cut Nazir’s hooves so short that I could see blood in the hoof and poor Nazir walked like on hot coals for a whole week. Once, the right front hoof was cut a lot shorter than the left. I wasn’t allowed to pay for a proper blacksmith because he wasn’t my own. I also wasn’t allowed to clean out his box, because other people would want to do the same thing, and then there would be total chaos! In post-communist Poland, marching to a different drummer is not appreciated, I learned that very quickly.

As often as I could I went out to the stable to go grazing with Nazir, nurse his hooves and take lessons on him. I was only allowed to ride him under the eyes of an instructor, that was part of the deal. In consequence I had to ride in a way that I wasn’t ok with, their style of riding was much to hard for my taste. Anyway, Nazir didn’t know a lot, he could stroll through the forest, but that was about it. He walked on his forhand, couldn’t bend his neck, lost his balance in curves, couldn’t canter on a right lead, was dead in the mouth and didn’t know anything about contact to the bit. But somehow I had already fallen in love with this guy and started training him as best as I could in these conditions.

With the better training and a lot less work Nazir started to look better. His coat became more shiny and he had more fun being ridden again. His hooves also improved a lot, but of course there was only so much I could do considering the stable hygiene.

Once, Nazir was very lame on the right hint leg. I annoyed everyone until a vet was finally called. He said everything was fine. I took Nazir over one month to walk normally again. Don’t get me wrong, I don’t want to accuse anyone and I’m sure the stable owners have the best intentions and love their horses. But to see so much mis-management was painful and I had the wish to buy Nazir and take him out of there. In March 2012, my husband, my family, and some good friends, managed to scrape the money together and make my big wish come true. I bought Nazir for the outrageous sum of 6.400$. He was only 4,5 years old and had a good character, but that didn’t justify the price. The owner just knew that I would pay. Once I had signed the documents Nazir also got his first ever flu shot. Vaccinated Horses cannot be sold to the butcher for the meat.

As soon as Nazir was mine I started to look for a new home for him and found Julia’s wonderful stable Wyreba south of Warsaw. Here are some photos: 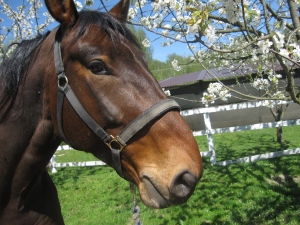 Nazir still had a slight limp which I had checked by the vet. The digital x-rays showed a broken fetlock that had healed allright and probably wasn’t the source of the problem. Nazir’s hooves were still very sensitive to the touch. The vet prescribed orthopedic irons and Nazir quickly showed some improvement. We had a great time at Wyreba with its cherry trees and apple plantations. Julia helped us a lot, she’s a great trainer. Unfortunately, Wyreba doesn’t have much pastures, so I moved Nazir to a stable in the north of Warsaw that has lots of green fields. I think Nazir has the best of homes in Olender, but I do miss Julia and our training sessions.

Shortly after had we arrived at Olender, Nazir developed a sore back. The first vet I called couldn’t find a problem and prescribed massages. That didn’t really help, and I called another vet who found out that Nazir has arthrosis in his right back leg, the leg that was injured when I started renting him. The ultrasound showed an old lesion of the patella tendon and lots of damage in the stifle. We’re in the process of treating it, quite successfully, and I’m trying to be optimistic about it. Yet, I can’t help but think that a proper treatment back then could have spared him the trouble that he will have to live with for the rest of his life, for arthritis cannot be cured.

Nazir has developed into a kind, eager, sensitive, and trusting animal. I’m his proud owner since almost two years now and I really couldn’t imagine life without him. He has taught me so much that I’ve decided to start this blog. My husband, always supporting me, gave me a new camera for this purpose, so I would like to share some last photos of Nazir in his current stable, Olender: 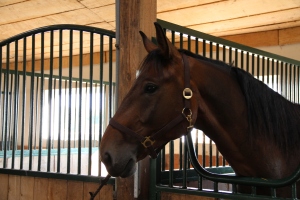 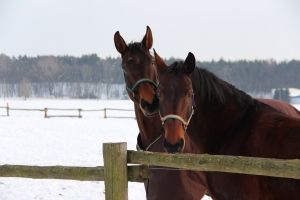 Now you know how I finally came to own a horse. And I did not expect how wonderful it feels when he waits for me at the paddock gate. Thanks for visiting 🙂

Short Walk in the Snow →

11 Comments on “How I Finally Came to Own a Horse”

This site uses Akismet to reduce spam. Learn how your comment data is processed.